The CBYA competes in the 5 Clubs Spring and Autumn series of regattas.

Each series has a race start from the Club Náuticos of Moraira, Altea, Campomanes, Villajoyosa and the Real Club Náutico de Calpe, forming 5 races per series. All 5 Clubs regattas are combined with a lunch – a breakfast at Campomanes – which is always a fun social event. 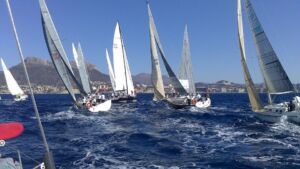 Races are split into a Spring series (January to May) and an Autumn series (September to December). All yachts taking part must be minimum length of 9 metres and require a rating certificate. CBYA members’ yachts ratings are sponsored by the Association.  To ensure interest in the races, three categories have been created – ORC-A, ORC-B, and ORC – C. These depend on the individual rating of each yacht, which is used for the handicapping system.

These races are run under the ISAF Racing Rules of Sailing (RRS 2013-2016), the pre-registration of the Royal Spanish Sailing Federation, the Technical Regulations 2010 and annexes, and the Security Regulation ORC ISAF

Anyone wishing to take part, must be a fully paid-up member of the CBYA and have an annually renewable card, called a ‘Licencia Federativa’ which provides insurance cover. These are available from any Club Náutico. See more details at https://cbya.org/licensia-federativa-2016-details/

The CBYA has been invited by the Real Club Náutico de Calpe to participate in their annual TOMs liga championship. This involves four series of races (Winter, Spring, Summer & Autumn) with each series comprising three race days of typically three races each day. Two of the six existing TOMs yachts are reserved for the CBYA to crew, and we race against the other four yachts which are crewed by RCNC members.

There are a number of offshore yacht races that are open to the CBYA, either as a crew member or as a yacht-owner. These include:-

If you would like to take part you must be a fully paid-up member of the CBYA and have an annually renewable card called a Licencia Federativa which provides insurance cover. These are available from any Club Náutico. See more details at https://cbya.org/licensia-federativa-2016-details/