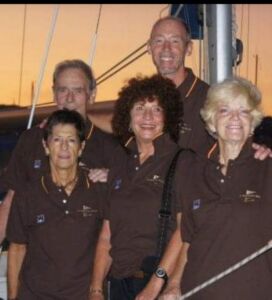 As a club official at the time, my name is on the original  official documentation for the CBYA.  As Social Secretary, we tried a few different events e.g. Last Night of the Proms party with everyone and everything red, white and blue, and with live transmission from the Royal Albert Hall. A novel Walking Quiz around Javea Port area was a success, which can be repeated when Covid permits. The current large membership justifies a Social Team, and we are very lucky to have such volunteers. 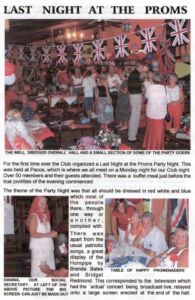 Two really. Years of honing lifesaving skills came into serious use on a raft up in Granadella Bay. The second being the start of the Les Bassetes Days. As well as the Hobie Cats, the first day included canoeing, windsurfing and snorkelling all with expert guidance. The Hobie Cats are now a firm favourite in the CBYA calendar. 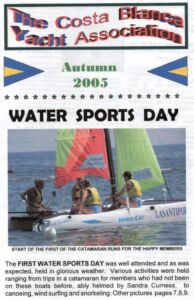 Give us an amusing anecdote.

Marking 200 years since the Battle of Trafalgar, the U.K. sail training tall ship Stavros S Niarchos had a programme of sails and courtesy visits to Spanish waters. Extremely short handed for a 200 ft brigantine, the Captain called for volunteers at only £99 for 8 days! Signing on in Gibraltar, Mary Saunders, Sandra Soper and I had to prove we could scale 100 ft up rope ladders, use the double harnesses to transfer to the booms and gather in heavy canvas sails even when out over the water. There were about 200 ropes on individual pins, on both sides – all unmarked. After a week of “2 – 6 heave, 2 – 6 heave” we sure knew every rope! 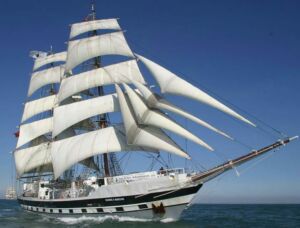 It was a ‘dry’ voyage so you can imagine our pleasure hearing the announcement  that we could buy alcohol on the BBQ night. Expecting plenty of younger crew buying beers, the Purser was completely taken aback to find first in the queue were us three asking for a bottle of wine each. Then he realised “Oh yes, The Ladies of Spain”!

The CBYA members have enjoyed two America’s Cups based in Valencia, three Volvo Ocean Races starting from Alicante, a multinational fleet of Tall Ships gathering in Alicante for a Round-the-Med trip. Currently Richard, Amanda, Victor, Steve and I are aboard TrickyD in Corfu, the turnaround marina for our Denia/Ionian Islands/Denia two month trip. Its a treat to see my old laser and cat being recycled at the CBYA El Portet Dinghy Days. All examples of the CBYA growth and diversification giving so many sailing opportunities to its members. Did Ron ever imagine his original idea would be so successful? 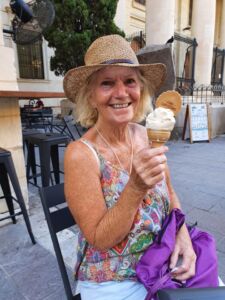 Many thanks Diana – what an amzingly, active life you have led! 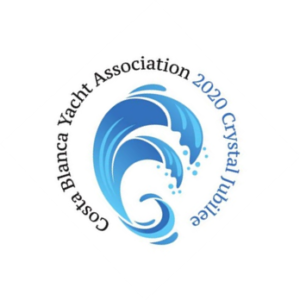 Diana is my mother. She sure is an active lady and I’m proud that she has been able to continue her passion for sailing with the CBYA.

Diana is a marvellous lady and overall amazing human being. Gentle, generous, witty and brave. I feel so privileged to have been able to spend long sailing weeks in her sparkling company. Thank you so much, dear Diana, for putting up with my weird English and wacky Spanish ways. You are a superstar. Much love from the Peloponnesus, and best of luck in your last leg (ahem) to Denia!

Totally agree with Victor´s words on dear Diana, a valued friend..
Thank you Diana for your very interesting anniversary interview contribution. When did you find time to write that?
Wishing you & TD crew safely home to Denia marina . The voyage Log Book must be the making of a book! What a dramatic cruise it has been. I feel a homecoming party coming on! Bxx

Having met Diana though the dive club we have had many happy brilliant times with the fun loving special friend and dear dear mate Enjoy your trip back it sounds fabulous all the wonderful places you have been to and good friends you have met? Best Wishes and Look forward to hearing all about it from you in person.
Safe Journey Back you special friend from the Wardle Family