You are a very active member of CBYA, so it is great to get your perspective on the club – please tell me why you joined?

I was considering buying a yacht, so I needed to speak with sea-going, like-minded people. The CBYA was the only English-speaking option at that time. 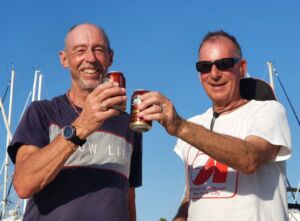 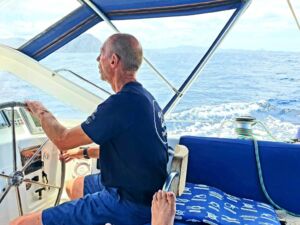 Taking delivery of my yacht TrickyD in September 2003!!! I celebrated with friends and members of the CBYA… The party started 36 hours earlier in the port of Sitges near Barcelona, where TrickyD was delivered and commissioned over the previous two weeks. Four members of the Dickies of Bangor Beneteau team completed her. I arrived at TrickyD ‘s berth to sunshine and a champagne reception. Soon after we were to leave Sitges for Dénia. An overnight shake down trip was planned. What a wonderful night of stars, and a clear night sky all the way. Eventually after all the excitement, and three days without much sleep, we arrived in Dénia to another champagne reception with friends and family. My adventures on TrickyD had started… 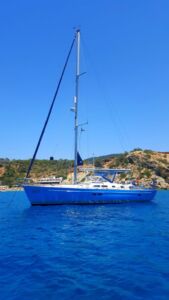 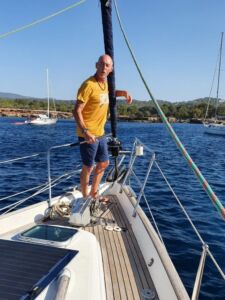 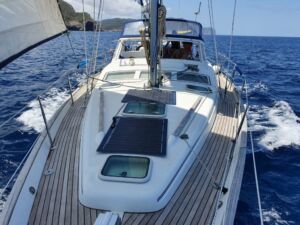 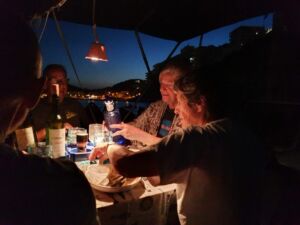 What was your role and how has this changed over the years?

After I returned from sailing TrickyD around the Mediterranean, I wanted to help the CBYA grow as a sailing club, and with this in mind l offered my services, and took up the post of Vice Chairman. Some years later l was honoured with the post of Chairman. Now l am a very proud Honorary Member and Ambassador for the association. 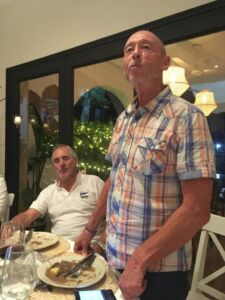 With the help of the committee team at the time, for which l am extremely grateful, – we kick started the CBYA as a new sailing club. We built a great partnership with the Real Club Náutico Calpe, which enabled us to start up the TOMs racing, and take part in the 5 Clubs Regattas, as well as cruiser racing to the islands. In those days we regularly had twelve CBYA cruisers taking part. Happy days! 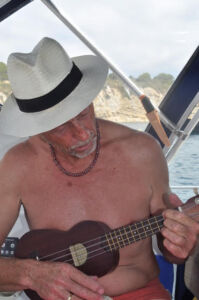 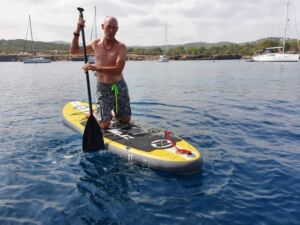 Can you give us an amusing anecdote?

So many happy sailing stories …here is one that comes to mind: TrickyD was involved in many 5 Clubs Regattas, and in longer races to the Balearic Islands. Traditionally TrickyD came in last. So much so that the Spanish nick named her ‘La Tortuga’ (‘the Tortoise’). We were taking part in the Peñón de Ifach race from Calpe to Formentera and back, when in our normal position behind the fleet in the darkness, a call came in from the race committee asking if we could help another yacht in trouble as they needed assistance. The yacht had no power and they gave us its last known position. We jumped to action stations and speeded to the last known position. No sign of a yacht in the darkness. Then in the distance a red flare was spotted. After some time, and the TrickyD crew pulling out all the stops, we all arrived safely in Formentera. The following day at the prize giving, La Tortuga was mention as a legend. Now after many rescues and adventures TrickyD is legendary.

(Note from the interviewer: TrickyD continues to participate in local races – and consistently arrives last because she is not a racer, but she is a very comfortable cruising ship!)

Richard – what are your thoughts for the future of CBYA?

The CBYA is a unique sailing club here in our beloved Costa Blanca. We now have a big following and a larger membership than most older members could have dreamt of ever achieving. My hope is that the CBYA continues to support yacht owners. With this in mind the constant promotion for new members with yachts, and looking after those members that have yachts, must be a priority. However, the TOM’s, 5 Clubs Regattas, dinghies, Hobie cats, powerboats, and raft-up activities should not be taken for granted – they all need CBYA ‘Santa’s little helpers’, and should have full support and recognition.

In this – our Crystal Jubilee year – I would like to thank members and friends, past and present, for their contribution to making the CBYA a success. 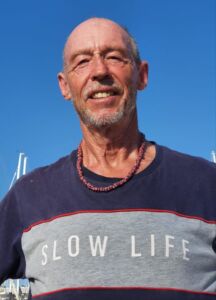 Thank you for this chat Richard. May TrickyD continue to provide you with many more happy days!

Thank you Richard for your memories, stories & thoughts on our wonderful CBYA .
As captain of TD you always been a generous host and patient skipper, allowing guests & crew to enjoy & learn from your experience.. Thank you.
I totally agree with & support your thoughts and wishes for the future of our unique sailing Club.. May your wishes come true!
Viva la CBYA & all who sail with or support her.! Brenda
.

Interesting read, Tricky. Always good fun being with you and you’re a very safe and conscientious skipper.
As for often coming last… “what is this life if full of care, we have no time to stop and stare…” wistfully at the sterns of the yachts ahead! 🙂
G x

Here is raising a glass to you for all the work you have put into growing the CBYA into what it is today. In 2006, when I joined, it was quite a skeleton organisation but with your efforts, when visiting the marinas the length of the Costa Blanca, together with John Godfrey at Calpe, the CBYA was invited to join the 5 Clubs racing and given the opportunity to sail the TOMs.

The CBYA grew with members for the cruiser racing and TOMS because of your efforts and, together with Brenda and Jackie’s social activity skills, enticed the partners of sailors.

At times the CBYA has struggled with more social members joining than sailing members but in recent years that has not been the case and we are enjoying members who want to be out on the water.
It is with these members that different ‘arms’ of the CBYA have evolved – dinghies, summer Hobie cat sailing – and it is nice to see some of these active members giving back to the Association by way of their time, after all we are a non-profit organisation, members working voluntary, with very low membership fees for what we now offer.

Without any of your intervention in the mid to late first decade of 2000 the CBYA would not be what it is today. With unfaltering commitment you are truly the backbone of the Association.

A true Ambassador and a credit to us all.