Having Fun on Hobies!

Since the CBYA Hobie Cat Day planned for end June was cancelled due to too much wind, we were lucky to be able to reschedule the event to Wednesday 19th July with 25+ CBYA members & friends signing up to join the fun.

The big day dawned to overcast skies, high humidity and NO WIND! Our hearts sank…. 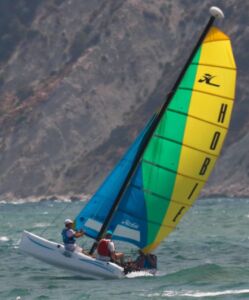 As we drove down to Les Basetes from Javea, the skies slowly cleared and the sun put its hat on. The sea seemed to be showing a few white horses – always a good sign! On arrival at Las Antipodas Watersports, we discovered that a big swell was running and the wind was much stronger than expected!

“Sorry” said manager Vicki, “We are not risking our brand new Hobie Cat in these conditions!” So, our booking for three big Hobies became a booking for two big Hobies!

However, Richard Evett , Graham Hustler & Bob Gordon did an excellent job organising the event, and everyone managed to get out on the cats, scream around the bay, and get soaked. 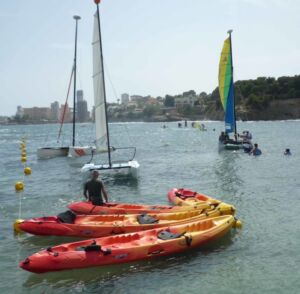 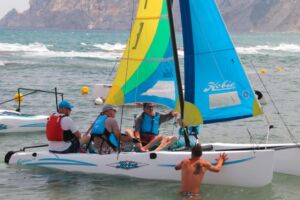 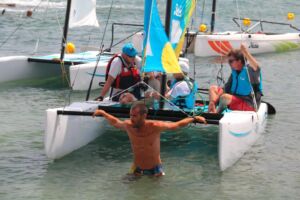 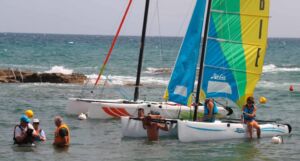 No mishaps, except for one almost-pitch pole, when a few of the crew were dumped in the water – skipper shall remain nameless – but all were recovered and continued to enjoy the experience!