Charter Holiday Cruising with the CBYA

In September 2019, 15 members of the CBYA travelled to Rogoznica in Croatia, for a one week charter cruise through the Kornati Islands.  We chartered two yachts, a Sun Odyssey 49i (S/V Barbara), and a Dufour 460 Grand Large (S/V Tenuto).

Upon our arrival at Marina Frapa, Skipper Peter Muir and his crew were able to board their lovely yacht, Tenuto. 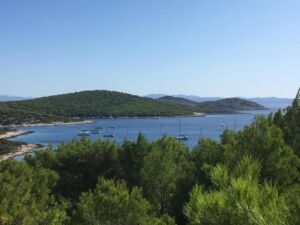 Skipper Peter English and his crew were searching wildly for their yacht, with it nowhere to be found. After a while, it was discovered that Barbara was not only at the dock for repairs, but she was also sitting without an engine!

With a time of departure set for 1700, Tenuto jetted off into the seas whilst Peter English and crew sat on the empty dock waving goodbye.

Just before the sun began to set, a sailing yacht matching the description of Barbara arrived to the dock and the staff assured the captain that the new engine should be fine. The crew jumped on-board and literally sailed off into the setting sun to meet up with the Tenuto crew. Barbara arrived under the cover of darkness, bobbing mast lights and the lights of Primosten made it nearly impossible to find their way into the anchorage. After setting the anchor, Barbara rolled and yawed over the uncomfortable swell. With crew members holding torchlights on the bow, the anchor was pulled up and a mooring buoy was finally found near by Tenuto.

Day One was not so perfect!

The following days of touring the Kornati islands, peaceful island bars, ruins and relics on shore to visit and fantastic weather made the journey a fabulous vacation!

The final night brought both yachts to shelter in a small cove, safe from the howling winds forecasted that evening. Upon arrival to the moorings, both yachts tied extra lines to the mooring buoy for security. One visiting yacht did not, and this was the party yacht!

After befriending a group of ten men from the Czech Republic, Al Mason and Peter English heard exuberant singing coming from the Czech yacht late in the night. With wine bottle and guitar in hand, both men boarded the dingy and headed over to the visiting yacht to join in the fun.

With the merry singing of sea shanty songs in Czech language, all the men were thrown off their feet in a jolt as the mooring line fell free of the buoy and the howling winds threw the yacht onto the shore. A second jolt embedded the keel deeper into the ground. In an act of panic, the ten men began to run around and sobered up immediately. Forgetting the mooring line was somewhere in the water, they started their engine, only to wrap the line around their prop. Realizing they were in a deeper mess, they all suddenly decided to strip naked and jump into the sea to try to free the yacht. Leaving Peter and Al standing alone in the cockpit and feeling in the way. So both CBYA members decided to leave the yacht upon viewing one remaining Czech man on-board standing stark naked before them, wearing only a snorkel and mask!

1) Always tie a second line to the mooring buoy.

2) Always check your mooring position, and…

3) Watch out for people wearing nothing but a mask and snorkel!

The Czech yacht eventually kedged their way off the shore and floated freely in the morning hours as we wished them a pleasant journey onward. 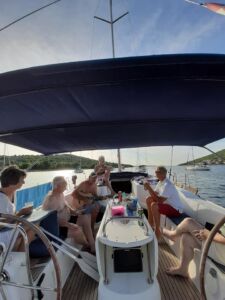 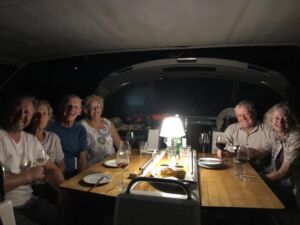 Unfortunately, Covid-19 has put a damper on our exciting Greece Cyclades trip this year, but we will prevail and carry on with a new scheduled charter cruise on Sept. 18 – 25, 2021. We know it is going to be a fabulous trip!

There are still spaces available on the five sailing yachts that we have chartered for the upcoming Greek Cyclades yacht charter next year. You can find the details by clicking HERE