Julie Benneworth mooted the idea of this excursion and, together with CBYA Vice-Chairman Neil Robertson, and partner, Vicki Dryden-Wyatt, organised a super four-night CBYA trip to the Isle of Wight for the Round the Island Race. Eleven of us lodged at the Royal London Yacht Club, thanks to Neil/Vicki’s membership there. 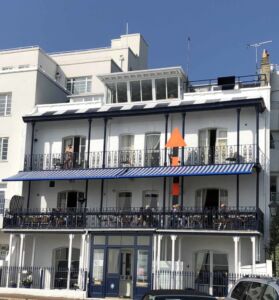 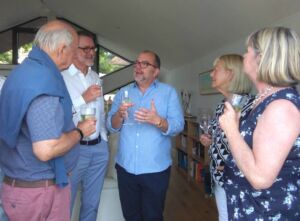 On the first day we had lunch at the RORC, and in the evening Neil/Vicki invited us to their lovely house for cocktails, together with some of their local friends, prior to all going for fish and chip dinner at the Island Sailing Club. 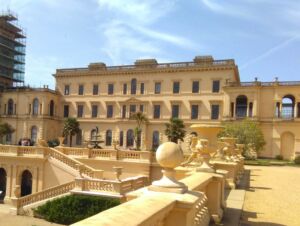 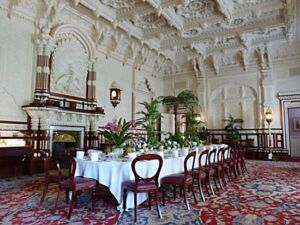 Next day we had various options, but most took the Floating Bridge across to East Cowes to visit Osborne House, Queen Victoria’s favourite residence. What a gem, packed with wonderful objects, paintings and many of the extravagant presents which she and Albert gave to each other.

Popped into one part of the Boat Museum in the former British Hovercraft Corporation works [where Hugh did his apprenticeship whilst at Loughborough Uni]. 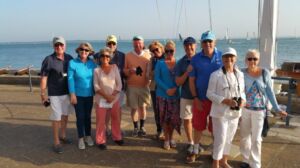 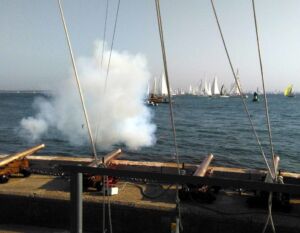 The first start of the 88th Round The Island Race on Saturday 29th June wasn’t until 07.30 and we bagged a good position at the Royal Yacht Squadron Line shortly after 07.00, right behind the Race officials who hoisted flags and fired guns. Actor Michael Kitchen [Foyle’s War] fired the first cannon, before heading to his own Starlight 35 yacht.

This year c. 1,500 expressed interest but strong winds on Friday deterred some, so only 1,210 were actually registered with about 15,000 crew, all prepared to battle it out over 60 nautical miles. The max field entry was in 2008 with 1,875 yachts.

What a sight! The larger craft went first with much vying for position along the line, but a clean start and off they went on what was the hottest day of the year so far on the Island. The wind being an east-south-easterly, 20-25 knots, meant they started with spinnakers, Jethou, looking splendid with sexy black Kevlar sails, and a shocking fuchsia-coloured spinnaker.

The action was fast and furious with 10, 5 and 1 minute warnings and 11 starts, with only three starts with yachts over the line [mostly due to the strong ebbing tide], but no time for recalls, so offending vessels received penalty points. 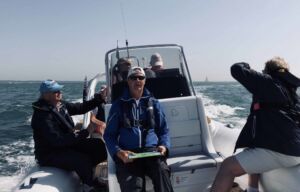 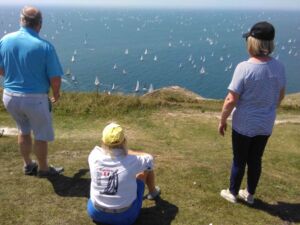 After breakfast, five of us went on Vicki’s friend Cindy’s 8m, 300HP, rib to get up close to the action “hang onto your hats”. Three others opted for a great guided tour of the island by Neil/Vicki, stopping at various vantage points to view the fleet. Wow – truly impressive to see sooo many yachts: an iconic, unforgettable sight, especially looking down at them.

The other three remained in Cowes.

The tide pushed the yachts to the Needles but then umpteen of the smaller vessels got rather stuck as wind and tide eased, and it showed that Kevlar sails definitely had the advantage. 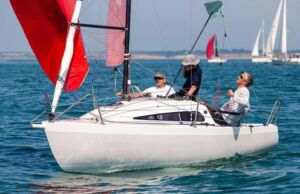 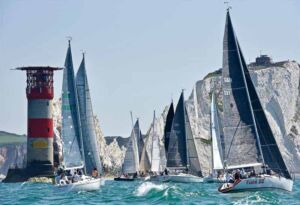 The race was slow with c. 1,000 retiring or missing the 22.30 deadline. Only 277 finished.  Number 259 was S/Y Eeyore, an 18’ Alacrity bilge keel [= 2 keels, can sit on mud at low tide], with a crew of three and the smallest vessel in the race: they finished in 13h 36m 32s [10h 29 on corrected time] and won overall on handicap [having been second on two previous occasions]. The current speed record was made in 2016 when a Super maxi 98’ finished the course in 2h 23m. This year Line Honours went to Yves le Blevec’s 100’ multi-hull trimaran S/Y Actual Leader, who took 7h 33m. Second was 60’ Judel Vrojlik Mini Maxi, S/Y Jethou, who took 9h 30m despite having hooked a lobster pot and hit the bottom: owner Sir Peter Ogden. 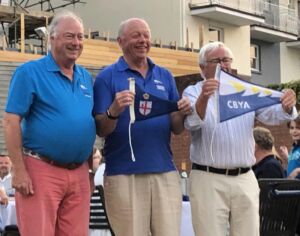 We had a viewing in the evening at Kendalls Fine Arts Gallery [formerly owned by Newscaster Kenneth Kendall] now owned by good friends of Neil and Vicki, followed by a BBQ at the RLYC clubhouse, during which burgees were exchanged between the RLYC and CBYA, with warm wishes of “Come and visit us again” and “When are you coming to Spain?” 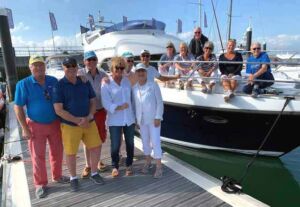 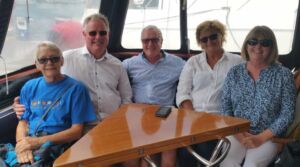 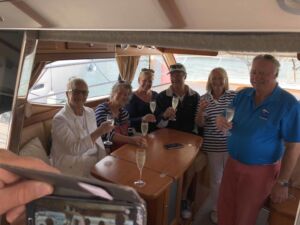 On Sunday Vicki invited us on her super fly-bridge yacht, named M/Y Quayline II, a speedy machine, still in immaculate condition after having her made in 2006 [before she’d taken her Skipper’s ticket!]. In less than 25 mins we reached Yarmouth, where champagne was served on board. Anders was very impressed that it was a Swedish-built Nord West 420 boat [43’] with Volvo engines AND Swedish crystal glasses: he was positively bursting with blue and yellow pride!

Thereafter we repaired to the Royal Solent Yacht Club where Vicki wrought her charm again and we were able to secure two tables overlooking the Solent for lunch.The time flew by, but we did pack in a lot and loved the whole experience. 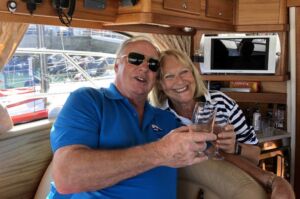 Huge thanks again to Neil and Vicki for their help, hospitality and enthusiasm, and to Julie, who already has plans for another IOW visit in 2020 – RTI race on 30th May – watch this space!

Thank you all for the report & great photos of such a super few days. Friends with local knowledge & Club membership was the cream on the top!

Saludos a todo.
B