35 Members of the CBYA assembled on Tuesday 17 October to visit the Volvo Ocean Race Village in Alicante. Most grateful thanks are due to Tim Fawle, for making this possible through his invaluable Volvo Ocean Race sailing contacts, and to Hugh Epsom for his outstanding organisation in putting the plan together. Also to Chris Bell for organising the transport and the delightful lunch for everyone at the Taverna del Puerto, and finally to Sue Bell for dealing with all the funding arrangements. Everything worked perfectly! 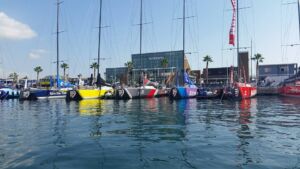 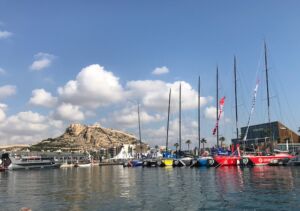 Early morning starts were necessary to coach all participants down to Alicante by 1000 to meet the tightly scheduled programme. A slight hiccup occurred en-route when Tim was alerted to the fact that Team VESTAS 11th Hour Racing, our hosts for the visit, had had to move away from the jetty first thing in the morning due to overnight jetty damage which had also affected their yacht VESTAS. This potentially game-changing development was splendidly overcome by ferrying us in two groups alongside VESTAS by a massive RIB so that all of us had a chance to crawl all over the boat and to question members of the crew about everything from racing to domestics and logistics. Most grateful thanks are due here to Tony Mutter and Stacey Jackson who looked after us all superbly. We wish them all well for the Race, and will be rooting for them!

On arrival at the Volvo Race Port in Alicante, we were met by K.T. Newman, Volvo’s VIP Host, who escorted us through the Race Centre after issuing us all with a VIP pass. The pass enabled us to also visit the Sailors’ Terrace for drinks, whilst enjoying a great view of the Volvo Race Village. Some CBYA members also used the card to later enjoy a 30% discount from the Musto shop!

Here we first witnessed the Skippers’ Briefing in progress where all seven participating yachts’ Skipper and Navigation teams were being briefed prior to the Race Start on Sunday 22 October. We then spoke to Volvo’s Environment Officer who was responsible for implementing the Volvo Race’s International Mission Objective to raise awareness of the need to eliminate plastics from the World’s oceans through teaching youngsters and promoting a range of plastics reduction and recycling initiatives. And finally, we visited the Race Control Centre where we were briefed by the World Famous International Yachting Photographer, Rick Tomlinson, who has been involved in 6 previous Volvo Races and who has been asked by Volvo to head up their Race Control Centre Operations for the 2017 Volvo Ocean Race.  Identical High Technology Equipment links all seven boats permanently to this Race Control Centre providing two-way smart communications and data feeds for position, course and speed, wind, weather, and oceanographic and plastics data. It also provides the first point of contact for all the boats in the event of accident or equipment failure.

After the Race Control Centre visit, we were introduced to Volvo Ambassador, and world- famous yachtsman, Nick Malling, an Australian, who  is a three times round-the-world yachtsman, and a two times America’s Cup sailor. Nick joined our group for a short while.

The group was then given time to explore the Volvo Ocean Race Village with all seven participating Volvo Open 65 Yachts berthed alongside, and the Team Pavilions, and the static displays open to view.

The highlight of the day was undoubtedly the opportunity for everyone to spend at least 30 minutes on board our host boat VESTAS and to put a plethora of questions to her very experienced crew members only 5 days prior to the start of the 2017 Volvo Ocean Race. 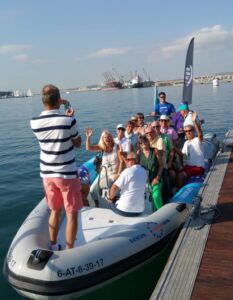 These Volvo Ocean 65 Yachts are a one design class. Technical variation is not permitted between boats and all the navigation and communications and data sets are identical. We learned that all the boats have mixed male/female crews, and also carry a Volvo media representative. The precise numbers vary from boat to boat to balance the overall crew weights, but VESTAS has a crew of 10, seven men, two women, and one male onboard reporter (who is not permitted to perform any sailing functions onboard). Weight is the most significant factor. Freeze dried food is carried for each leg, the longest of which is predicted to be 23 days. Each crew member carries about 25 kilos of personal equipment. Every time the boat tacks, the crew has to move all this weight from one side of the boat to the other in order to balance the boat. The centreline galley consists of a two-ring hob and three small basins, and there is one centreline carbon fibre loo.  Conditions below decks are spartan and dark in order to save electricity and there is a diesel generator to power the water maker to top up the 50-litre water tank. Bathing is best achieved on deck in the welcome rain showers. Salt water is less welcome, but is a constant companion in strong winds. The crew keep 4-hour watches, and must do all their support activities such as sleeping and eating and washing and communicating with home while off watch, as well as all the maintenance routines and repairs and being up and about for shifting weights when tacking and sail changes. Altogether life onboard is basic, exhausting and challenging, but it is all part of the buzz of sailing a Volvo Ocean 65 racing yacht at full speed around the world! Click HERE for more details of the Vestas race crew.

One of our group, when on the Vestas yacht, was advised that the Vestas onboard reporter is the late Sir Peter Blake’s son, James Blake. Although we did not meet him, members should Google him to learn about the fascinating adventures that he had in the Antartica, following in his father’s foot steps. Click HERE for more details of the onboard reporters.

Having next enjoyed the hospitality of the Volvo Ocean Race’s Sailor’s Bar, our final task was to assemble at the Taberna del Puerto for an excellent Spanish lunch, after which we took the coach back home. We had all enjoyed a very special day out, and our very grateful thanks are due to all those whose efforts had combined to make it such an outstanding success.

Update from Vestas, double crew switch. By default Hannah now back on and Jena is off for first leg. Stacey still there; also Tony Mutter , we hope wearing a CBYA cap!

A medical issue has forced Vestas 11th Hour Racing into two changes in their crew for the first leg of the Volvo Ocean Race 2017-18.

Two-time race winner Phil Harmer has a back issue, meaning he will not be taking part in the Alicante-Lisbon leg. Harmer is replaced by five-time Volvo Ocean Race veteran Damian Foxall, a winner with Groupama in 2011-12.

Harmer’s absence leaves a void in the requirement to have two medics onboard. In order to comply with the rule, Hannah Diamond, one of the team’s medically trained sailors, will compete in the first leg, replacing Jena Mai Hansen.

“Injuries happen in sport, and we have a lot of redundancy on the team, and we are fortunate to have good backups,” said Charlie Enright, skipper of Vestas 11th Hour Racing. “We look forward to getting them back as soon as we can.”

Interesting to read about your visit to this ‘Volvo ocean race machine’!

Great blog and a great day out. Thanks to all.
Best wishes,
Paul Smithard