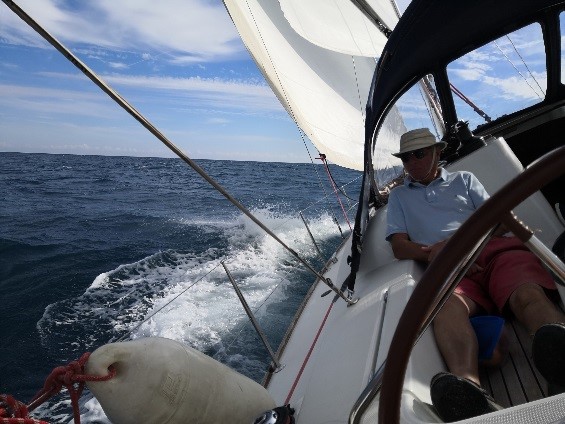 What a great day! We had a good taste of all wind conditions, and a great sail overall.

Note: Sadly Helen Harrild had to withdraw due to ill health.

After meeting at 10am at Marina de Dénia, completing brief introductions, and finding out each crew members relative sailing/boating experience, we boarded our charter boat for the day. A very nice Jeanneau 39i. 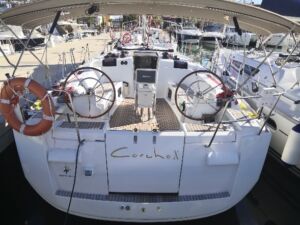 We stowed our bags below, then familiarised ourselves with the controls, all labelled (in Spanish of course), but we were soon able to trace the ropes & jammers to see what was doing what.

Each crew member was given a specific job ready for departure, and we slipped the mooring at 11.00am.

The weather was clear, little to no wind. The forecast was 5-6kts from the South, veering later 6-8kts SSW. We motored out, hoisting the main sail as we progressed before exiting the main marina area. We continued to motor sail for about a mile, then we found 4-5kts of wind, so sailed smoothly for a further 5-6 miles, before the wind died completely. So we then  drifted for a while and took the opportunity to enjoy an early lunch. Starting the engine we then motored back towards the land, hoping to find wind closer in, and we did.

The winds went from 4kts to 25kts, from the South, in a matter of 10 minutes. So we reefed the Genoa by a third, and headed for St Antonio Point. Each crew member taking a turn on the helm. Tacking a couple of times, we made Jávea bay in under an hour.

The wind eased slightly when in Jávea bay, to about 16kts SSW, so after a few tacks, we thought we would do a circuit of the bay. At a distance of about a mile we spotted a bright pink ‘buoy’, so we thought we would practise our sailing skills. Using the buoy as the windward mark, then gybe round it, that was the plan. But as we got closer, we realised it was not a buoy, but a drifting child’s inflatable flamingo!! Initially we thought that there may be a child with it somewhere, of which there was no sign, so we then decided to practice our MOB (Man Over Board) skills. 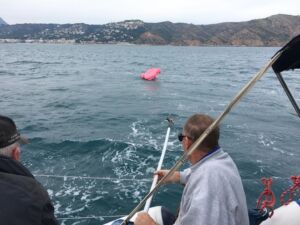 When doing a MOB you are supposed to approach up wind. But due to the inflatable being too unstable, & drifting too fast in the wind, we would probably miss it. So, it was better to come down wind & eventually catch it up, more slowly. By sailing past it, then gybing, we came back on it downwind, … managing to rescue it at the third attempt. This expereince led to great fun and laughter… well done to all the crew….

We then started to head for home at 2.30pm, with the wind approx. 12knts from behind, expecting the wind to die further, which it did. There were occasional wind shadows, but after a few attempts to find the wind again, we eventually put the engine on and motored back to Dénia.

Having ‘phoned’ in to the Marinero ‘Javie’ in advance, he was waiting on the berth to help with the lines and see us safely in.  We arrived  back on the berth by 5pm.

We decided to all have a well-earned beer, whilst discussing the adventures of the day, and planning the next CBYA Day Charter sail. This is planned to be Monday November 25th.  Most of today’s crew members are hoping to be there again then. So please advise if anyone else wishes to join us, – male, female, family or friends, the more the merrier, experience not necessary, just €60 a head. The more crew members, the bigger the boat we can get.

Please get in touch with me by clicking HERE

Glad you had a good day on the water. Who was ´myself the skipper´´ Hugh?

“Myself the skipper” was Mr Graham Hustler