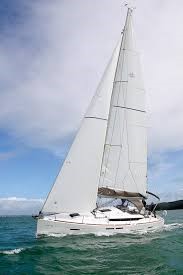 This was our first CBYA charter day of the new winter season, and our second attempt. The original day should have been Monday 26th October, however we had to cancel, due to very high winds, registering 42kts in the Marina de Dénia.  Náutica Corcho would not have let us take boats out, even if we had wanted to do so!  Amazingly, I had first seen this high wind forecast, which was scheduled to start building from 9am at 20kts, gusting to 44kts, and peaking at about 2pm, 6 days in advance. Thinking that that would certainly change, as the date came nearer, we planned ahead – but the forecast did not change in the slightest, they had it absolutely Spot On!!!  (How can they do that?!!)

We had a great response once again for this charter day, with 13 crew signing up initially. One person had to drop out with work commitments, leaving 12, so I arranged to charter 2 boats…. but alas, this had to be cancelled.

When I was later able to re-arrange a further day at short notice, the goal posts had moved yet again due to the Covid regulations. So we were now limited to a group of 6 per boat – a skipper and 5 crew. However, after putting the invitation out to the already paid up crew, we thankfully did get just the required 5 sailors.

Meanwhile, due to the now limited numbers, I had been able to re-negotiate our deal with our good friends at Náutica Corcho. So, with just the 6 people on board, the charter remained economically viable.

The crew was Jim Cooper, Allison O’Brien, Alan Bailey, Tristan Goodfellow and Peter Bird, with myself as skipper. 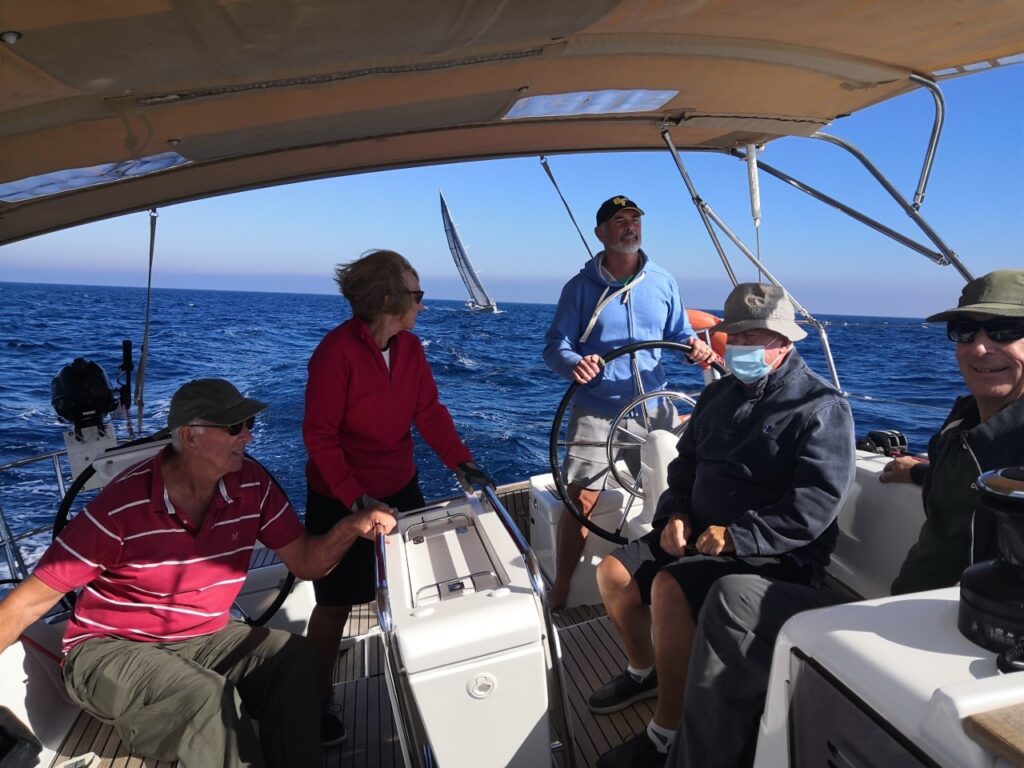 Having carefully checked the wind forecast, we met as normal at 10am at Bar Due. The wind was a very light 2-3kts. Having completed the introductions and briefing, we headed for the boat.

Náutica Corcho certainly look after us. All their fleet of 14 boats, are Jeanneau Sun Odyssey’s, ranging from 37ft to 55ft, and of varying age. We now pay the set agreed fee for a 39ft boat, but they frequently upgrade us to something that is more readily available. This time it was a lovely 3 year old, 44.5ft yacht!

Having familiarised ourselves with the yacht, we left the berth at 11am, in a light 2-3kts of wind. As we motored out of the marina entrance, the wind increased slightly to 4kts SSW. The sea was very slight. We put the sails up in the hope the wind would increase as was forecast, from about 12noon, but it was late. As we were heading very slowly South, for St Antonio Point and Jávea Bay, we saw another sailing boat behind us, of the same size, but with ‘Kevlar Sails’, which was gaining on us. Thinking nothing of it, and with progress being slow, we could see wind coming on the horizon, we decided to put the engine on and go and meet it. Within 15 minutes we were suddenly in 15kts of wind and sailing well. With each crew member offered a turn on the helm, we were making 6-7kts SOG.

We then saw the French-flagged, ‘Kevlar’ yacht gaining on us once again. 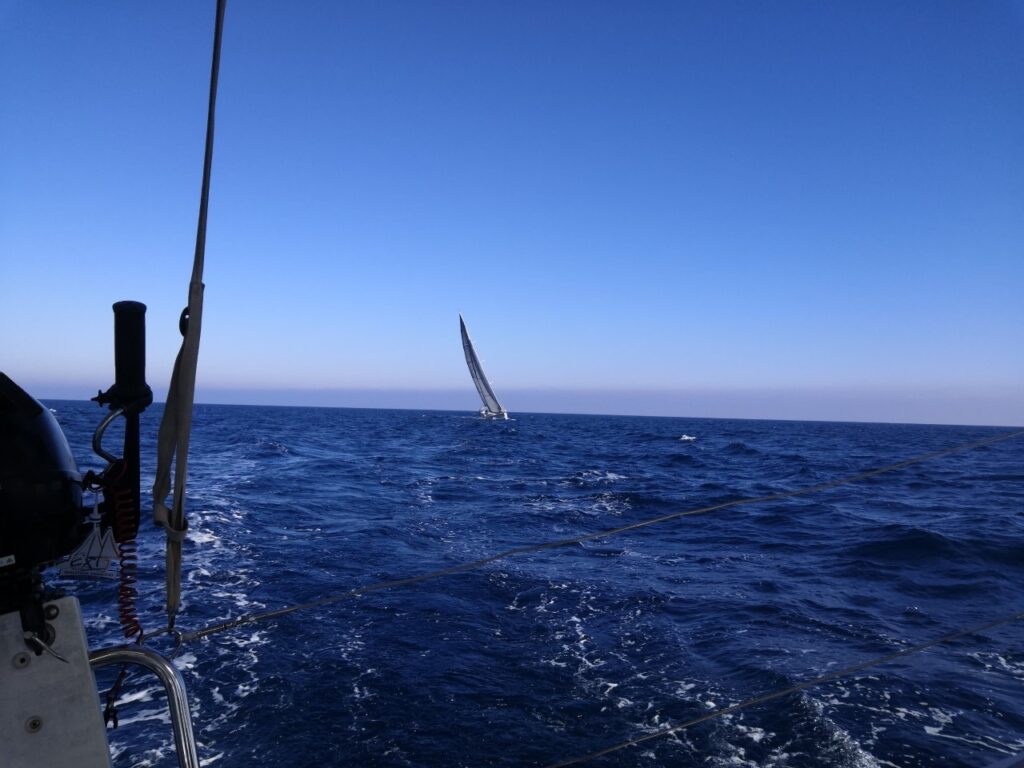 We were sailing well, but there wasn’t much we could do this time. So just to prove the point, they eventually passed us. Then after a safe distance, they simply turned to starboard in front of us and headed back to Dénia!! We gave them a wave….

We sailed on across Jávea Bay, with the wind now at 22kts from the South. After passing Cap Prim, and with an eye on the time, we decided to turn around to head back to Dénia. With the wind behind us, we could not quite set the sails ‘Gull-Winged’ (or as per a new term I learnt on the day ‘Dog Ears’!!) So we ended up on a broad reach, maintaining 7kts. There was a now also a swell, pushing us from behind, so we found it far easier to use the auto-helm, rather than play the helm endlessly.

The wind held all the way North, back to Dénia. So, having allowed 2 hours for the return leg, we had made it in an hour and a half. Still sailing well, we headed East for a while, back out to sea. Eventually, with the wind now easing, we gybed, turning back to Marina de Dénia, and arriving back on the berth by 4.15pm.

Then to round off a great day in good company, enjoyed by all, it was now beer time…..

N.B. The next scheduled CBYA Charter Day is Monday 30th November. The usual invitation will be going out from the CBYA website next week. I have started the list already, so you can get in early if you wish, by contacting me by clicking HERE

Thanks to all the crew.