An Exciting Day on the Water

The sun was shining, the sky was blue, there was a gentle breeze and all was true. Although a little chilly, conditions were perfect.

Dave Peachey turned up with a new inflatable dinghy and new outboard, which he had apparently purchased 5 years ago, but never used. After some initial problems with the outboard bracket, all was sorted out, and he brought the boat round to the El Portet dinghy hard. By that time, we had launched our ‘borrowed’ safety boat, and Paul Maudsley was out on the water warming up the outboard.

After a short time of making some rigging adjustments to Wally, Richard Evett took his first trip with CBYA crew members who wanted to learn, but were not experienced sufficiently to sail on their own. He repeated this several times over the next couple of hours, and several members benefited from his experience and tuition.

We then rigged one of the Lasers and after some ‘gentle persuasion’ Dave agreed to give it a go. He went out twice and came back with a ‘big smile’ and a lot more confidence.

During this time several potential new members turned up, and I became involved in the recruiting process. As a result, five promised to join and pay their subs on line.

It was now about 13.00: Hugh Epsom called me to say he was a little delayed, but he would like to come down and have a sail, and would be down in about an hour. The boats were all rigged, and on the beach, but Richard wanted to change into a wet suit and sail the Laser. So that was the signal for the rest of us, about 12, to assemble at the café drinking coffee and chatting nautically and watching Richard sail the Laser in what had now developed into a strong breeze, with quite a ‘lumpy’ sea running onto the beach.  Rachel turned up, made many excuses for not sailing, but joined us for a drink, and did some new recruit ‘chatting up’.

Hugh had by now arrived, as promised, coming down the steps near the boats, and Paul Maudsley, who wanted to sail in Wally (our 420), went off to join Hugh and Richard, who was now also back on the beach. We were then entertained by a wonderful sailing display by Hugh on the Laser, and Richard with Paul on Wally. The wind had increased in strength slightly so the two boats were ‘zipping’ back and forth across the bay in front of us, all very entertaining. 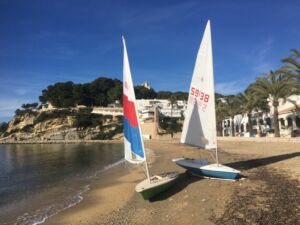 Someone asked me why I was so quiet and I explained that, in such a situation, it was my duty to have my eyes all around me, and keep a watchful look out on our boats. No sooner had I said this than we saw the Laser capsize. We watched for a few minutes and saw that Hugh had managed to right her, and get back on board, but a few moments later she was over again. At this point I grabbed Dave and we ran down to the safety boat. There were now quite big waves coming onto the beach, and Dave was up to his chest in the water holding the safety boat, whilst I got the engine started, which luckily it did first time, as Paul had warmed it up earlier. Off we went through the waves and made for the Laser, which was slowly drifting towards the rocks on the left side of the bay. I then saw Richard had abandoned Wally and was swimming across to the Laser. When we got near to the two boats, I saw Hugh in the water hanging onto Wally, Paul in Wally and Richard now climbing on board the Laser, which Hugh had managed to right again. We circled Wally a couple of times trying to get hold of her painter, but the waves were now making things difficult. We were also getting very close to the rocks, with the waves breaking on them and causing a back swell. Hugh swam round to fend the boat off the rocks. I managed to position the safety boat beside Wally, and we held her alongside as we pulled her away from the rocks, with Hugh now in the water hanging on! It took some time, but we eventually arrived back at the beach, Hugh dropped off the tow and swam the final distance back to the beach, where he helped to pull Wally up onto the beach, as Richard arrived in the Laser.

All’s well that ends well……just a few very wet, cold and tired sailors, but proud of themselves. We de-rigged and went home. Another great dinghy day enjoyed by everyone. A few lessons learnt, but all part of ‘messing about in boats’!

Hugh’s only comment to me as we packed up was “I hope someone got some pictures of that!” My reply was that in the Dinghy Day ‘write up’ we could say “even Hugh went sailing on the Laser and enjoyed a swim!”, just as he had said about me on 1st January 2019!!

Another great Dinghy Day….why not come and join us next time?

Hi. It looks like you had a good sailing day, Im interested in joining you, when is your next session. please?
Dave

So sorry to have missed this entertaining and eventful dinghy day!! Great report.
Would have loved to be there (alas down with flu drinking tea with honey and lemon all day…sigh)

A great day out for a newbie to dinghy sailing. My personal thanks go to RE for his patience in explaining the subtle differences between sailing a TOMS and a dingy!