Conditions were light, but the competition was fierce!  Four TOMs took part, and three races were held.

The other three TOMs were:

The CBYA crew won all the starts!

During the first race, Team CBYA suffered a man overboard, but still managed to complete the race, finishing in fourth place.  The good start in the second race enabled them to finish second behind Suso, who won all three races! In the third and final race, Team CBYA finished last in a close race.

Overall Team CBYA secured third place in the regatta, – not bad for a scratch team, one of whom had never been on a TOM! 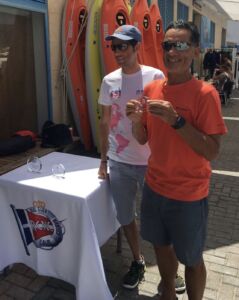 The remaining RCNC TOMs regattas are: