It was originally scheduled for Thursday 28th April but had to be postponed due to bad weather, despite finally managing to sign up race crews for four TOMs, all of which complied with the race rules of the crews having to exceed a total age of 260 years for 4 crew, with an average of 65+ years per crew. The regatta was rescheduled for Thursday 12th May. Unfortunately, many of the sailors were not available for the revised date, so new crews had to be found which met the race criteria. After considerable effort, the organiser, John Mackney, again succeeded (after a little cajoling and arm-twisting) to secure the necessary crews and skippers for four TOMs.

We then discovered that, if we proceeded with the regatta as planned, with RCNC providing a Committee Boat and a Race Officer to run the racing, all participating sailors would have to have purchased the SomVela Licensia Deportista. Some of the crew were not willing to purchase the full licence (costing 60€ per person), so we decided to run the event by ourselves in the same way as we run the TOMs Ladder racing. This meant that we would lay the course, and start each race by ourselves, thus allowing the Real Club Náutico Calpe sail training insurance cover (8.50€ per person) to be accepted.

The weather forecast looked good on the day before the event. The restaurant for the lunch after the event had been organised by CBYA Social Team member, Stuart Eynstone-Hinkins. CBYA member Mike Cuthbert had kindly agreed to provide his yacht to take out our Public Relations Coordinator, Dave Proctor, to get some action photographs. John had purchased the trophies and had them suitably engraved. So all systems go!

However, things were not going to be resolved that easily as later that day, two of our four skippers advised that they were now unable to sail in the Veterans’ Regatta! Fortunately Antonio González de la Madrid, the Director Deportivo of RCNC, agreed that John Mackney could be approved as a CBYA TOMs skipper, thus allowing us to go ahead with the regatta with three TOMs, instead of four as planned. Two more of the original planned crew members having also dropped out.

Finally the big day arrived, and the crews assembled at RCNC on a beautiful day with ideal sailing conditions, for the briefing and to rig the yachts. However, we had one more curved ball to handle, as one of the crew failed to show on the day due to a misunderstanding, forcing us to sail two TOMs with four crew, and one with only three crew. 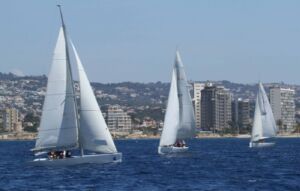 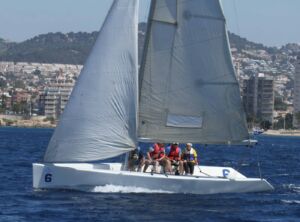 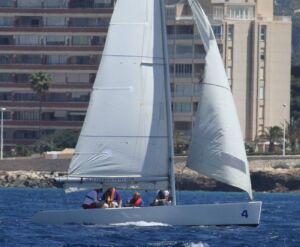 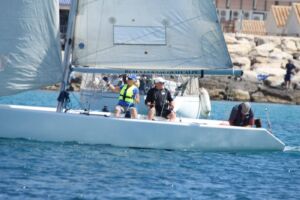 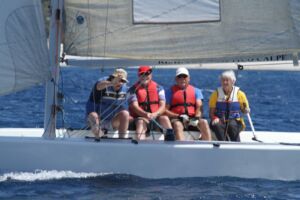 The racing was great. We completed three windward-leeward races in the time allowed, with the following results: 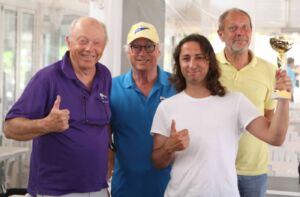 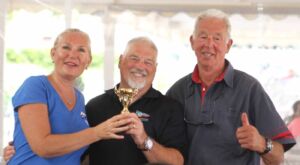 The Did Not Finish (DNF) on Hugh’s TOM was due to Neil deciding to take a swim so that we could practise our MOB procedure.

We then enjoyed lunch at the nearby El Camion Restaurant, where the trophies were duly presented. 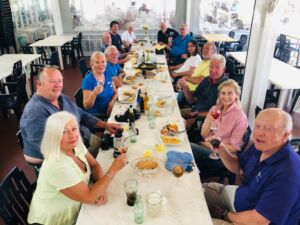 Many thanks to our Boating Officer, John Mackney, for his persistence and dedication in making our 2022 Veterans’ Regatta a success, despite overwhelming odds!