Cardboard Boat Race – where were you??

As part of the CBYA’s 15th (Crystal) Anniversary last year, members were given the opportunity to build and sail a boat, made solely of cardboard and duct tape. Due to the pandemic, the event was postponed to this year as the first all-CBYA Regatta. The idea – Tanya English’s originally – was to construct it in two hours on the beach to avoid cheating! Then race the contraptions round a marker buoy 100 m away and back… maybe. There were to be prizes for the best boat, name, costume and spectacular capsize…

For various reasons, 10 days before, the only entry was the Chairman’s boat, with a couple of “iffy” maybes, so the ‘race’ – Chairman’s Charity Challenge – has been postponed until next year. However, having prepared a template, Hugh Epsom wanted to see how far his boat would ‘sail’ so he built it at home. It consisted of a simple design, c. 6 ft long by 2 ft wide [just fitted in the car], to which he added cardboard tubes for more stability and floatation. He calculated weights, displacement and built a scale model to test it in water. Nothing if not thorough. The name Nautilus was chosen, because it was a foregone conclusion the vessel would become a submarine. 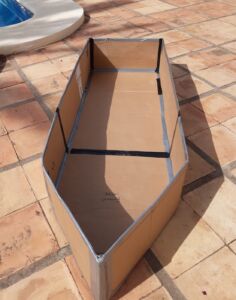 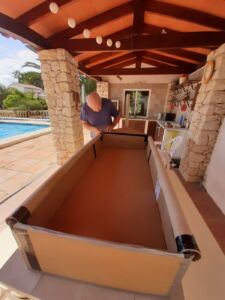 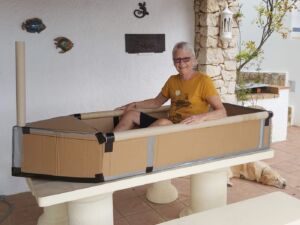 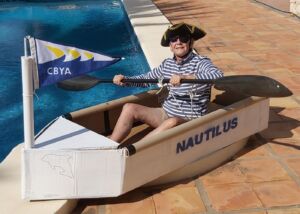 He volunteered his wife, me, to be the skipper: “She’s lighter than me!”, and Spanish friend, Mauro, lent me his paddle. I wasn’t entirely convinced about Hugh’s calculations, but shouldn’t have doubted his engineering background: it was all perfect. 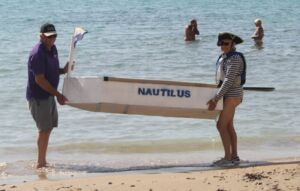 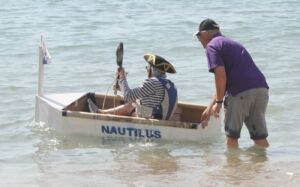 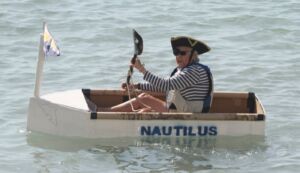 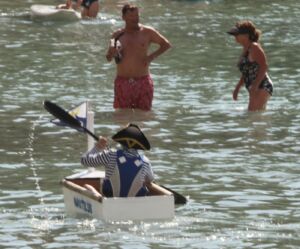 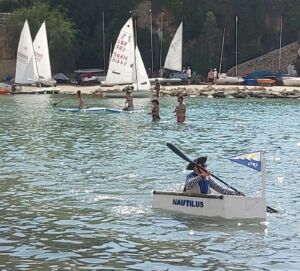 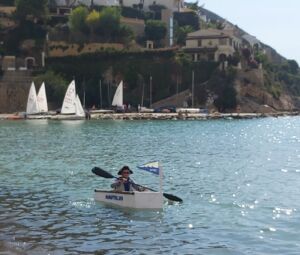 We duly launched the boat on Wednesday 13th October, which was a Dinghy Day, at El Portet, Moraira, to the amusement of everyone on the beach, several of whom took photos. I donned pirate gear. Surprisingly, it floated for 20 minutes before it started to sag, and I could have stayed afloat a bit longer. 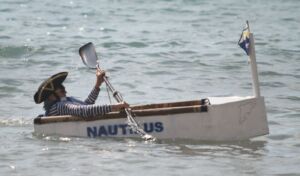 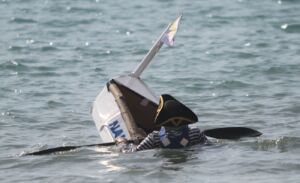 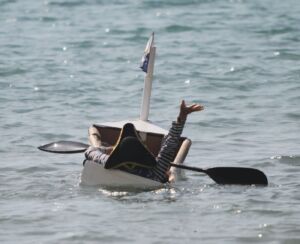 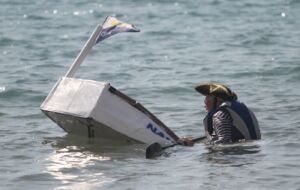 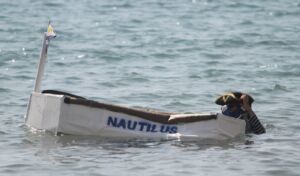 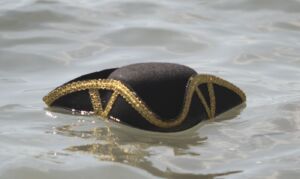 I was a total novice when it comes to kayaking – and still am. Mauro omitted to tell me which way up I should be holding the paddle for maximum effect: fortunately, in this instance it wasn’t a race. However, I managed to manoeuvre parallel to the beach and back, at least 300m!

Hopefully a few other CBYA members will take up the Chairman’s Charity Challenge next year to see if they can beat the Nautilus record!! If you are interested to take up the challenge, or don’t believe my report above, click HERE for video proof!!!

Thanks to the members who came to watch, cheer, applaud [as did some non-Club spectators!], and generally encourage my valiant efforts. I should, by rights, have won all four prizes… maybe next time!?

The boat looks great Gillian and Hugh!
Who can beat their 20″ staying afloat next time???!

Excellent Hugh & Gillian – you’ll be well practiced for next year’s event and a definite contender for a prize! I hope Gillian got some reward for her valiant efforts, correct paddling technique or not! 🙂