Twenty-five yachts entered the 3-day event comprising several windward-leeward races, and a longer coastal race. There was a special promotion category for members of the Club Náutico, which allowed twelve yachts to enter only the coastal race around the island of Tabarca, Santa Pola.

We had a 11.30 am start time on Saturday, with classes starting at staggered times. The twelve promotion teams eventually going through the five-minute count down sequence at 11.50 am. We crossed the start line 20 seconds after the gun!! A good start!! 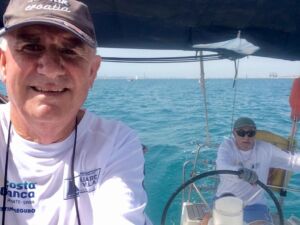 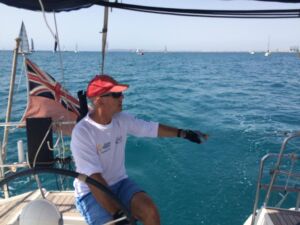 We sailed to a very short windward mark, and then the 8.5 miles downwind to the first cardinal buoy at Tabarca. A steady 13 – 14 knots kept Jemila moving along nicely at about 6 knots. The wind dropped around the south side of the island before hitting 11 – 12 knots again on the beat back to Alicante. 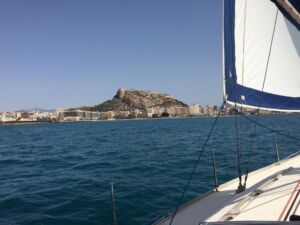 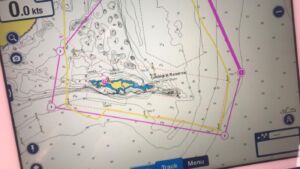 Near to the finish line, three yachts were just minutes ahead, and one was close behind. We finished at 17.30pm, which gave us 6th position, and we were very satisfied with the result!!  We sailed 27.5 miles in five and a half hours.

Festivities commenced soon after in the race village, and an enjoyable evening was had by all.

Well done Jemila & crew.
Looked like a super event to be involved in.
Happy sailing!
Bx

Thanx Brenda, it was very enjoyable, and hope to see you at the lunch in Calpe on 19th ???