Five Go to the Islands

A team dinner on Thursday night at Mala Vita in Dénia was followed by a wonderful departure on the Ruta de la Sal start line the next morning. Tricky D hoisted the cruising chute in 15 knots, but within a few hours the winds conformed to the forecast and we were all but becalmed.  Rather than spend two days trying to follow the race drifting past Formentera to the south, then floating up the east side of Ibiza to go round the top to San Antonio, the crew voted for pleasure over perseverance; so we changed course and night motor sailed to Cala Sahona on Formentera arriving at 1am. 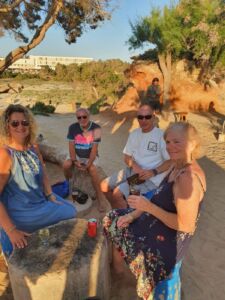 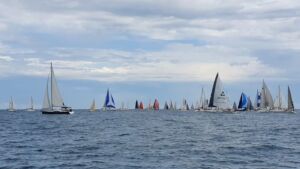 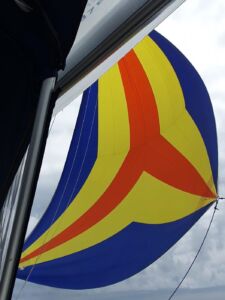 So started a chilled week of sailing, sundowners, SUPing, swimming and sunbathing in lovely bays as well as a bit of hippy chic sightseeing in Ste Francesc on Formentera. In addition to Sahona, we spent time in Espalmador and Pujols on Formentera before a bumpy but invigorating sail to San Antonio on Ibiza past the Isla Vedra (Bali Ha’i from South Pacific fame). It was a unique time to visit Ibiza for this island newbie, and Ibiza town was a delight, with very few tourists but plenty of bars and restaurants to choose from… and a great crew who knew all the best places to see. 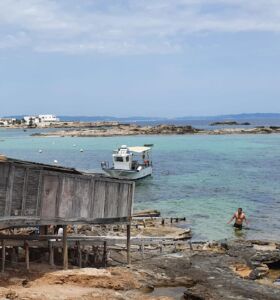 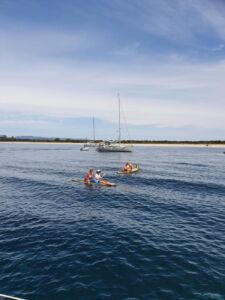 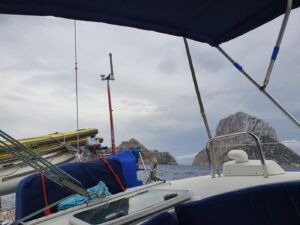 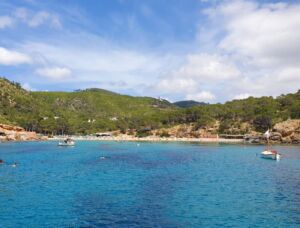 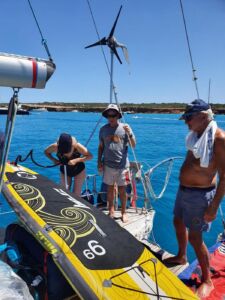 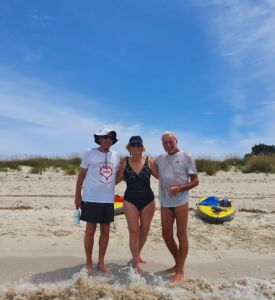 As we continued clockwise round Ibiza, one of the highlights was ‘found’ by chance as we tried to head across the north of the island to Portinatx. With 25-30 knots of wind on the nose, long tacks provided little easterly progress, so instead we ducked into Cala Benirras (with its Queen Victoria rock).  Di and I went exploring the bay on paddleboards but were drawn to the bohemian beach bars… and soon joined by the boys; Jim, Richard and Peter (which had nothing to do with the glamorous photoshoot on the beach!). 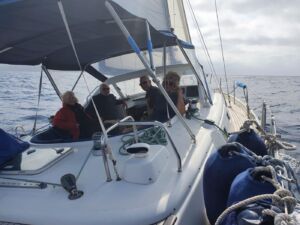 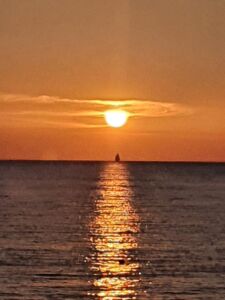 Having decided against rushing back for the Campomanes regatta (this was definitely a pleasure-seeking crew), we carried on around Ibiza to the very neat Ste Eulalia, our only marina stop on the trip. After a final team dinner at a great Chinese, a few of the crew finished the night singing with Henry James in Mirage until the early hours.

Good winds blew us back to Dénia on Saturday, mercifully avoiding the bad weather we were hearing about from the mainland, and the auto-pilot did most of the work.

This will be the first of many trips to the islands for me, I hope. Lucky old Tricky D is off there again in a week’s time.

Sounds awful Debs. Don’t know how you survived. Especially with those 3 male reprobates on board too.!