As part of our CBYA Crystal Jubilee celebrations, each month we are going to hear from a member who has made a significant contribution to our club. This month we are are publishing an interview with our Honorary Member Rachel Garnham, who is currently our Membership Secretary, and Training Officer.

Hello Rachel. Thank you for agreeing to be interviewed!

Can you tell me why you joined the CBYA?

Sailing has been a life-long interest, and I needed a distraction… after a few years in Spain, I happened across the CBYA advert in the Costa Blanca News. So – to have a distraction, and to be sailing again (I’d been on and off boats since I was 6 months old!) – I attended one of the regular CBYA Monday meetings.

What was a memorable first experience?

I turned up at the bar beside restaurant Mason de Paco and met a motley crew of very friendly people. The evening was going well, parish notes by Brenda, and sailing events by Peter Hooker (alas no longer with us). Nothing was done by email then; there was a notice board with a sheet asking for crew to go sailing the following week. So I put my name down, but then heard from a voice behind me “you’re new, you can’t just put your name down, there are plenty of existing members who want to sail before you”. So, that was it – I’d have to wait. But, as it turned out, there was space, and I sailed out from Dénia on Chris and Kathy (also no longer with us) Middleton’s boat, with a few others, and we had a great day. 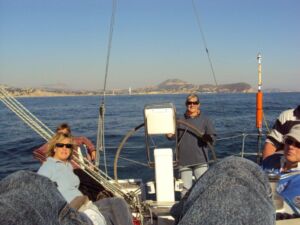 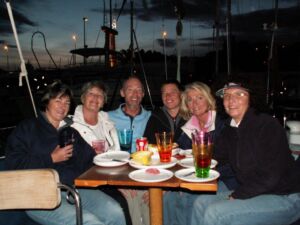 What was/were your role(s) and how did this change over the years?

I joined in the summer of 2006, and within a few months Brenda was chipping away at me to take on the role of Social Secretary. So, at the 2007 AGM I was voted onto the committee for this role. Within a year I was then asked to take over from Peter Hooker as Boating Officer, which I gladly took on to arrange a handful of raft-ups a year. However, at that same AGM, some bright spark commented we did not offer any training. There was another member present who was also a long-standing member of Club Náutico Calpe. Suddenly, a training room would be available where we could have presentations – and so was born the monthly nautical presentations at Real Club Náutico Calpe to be arranged by ….. You Know Who! Over the years I have given many instructional presentations, tested CBYA brains with quizzes, shown DVDs on safety aspects to extreme sailing, and arranged, of course, the personal experience presentations by our members.

The start of the Calpe presentations coincided with the CBYA being invited to race the TOM 28 yachts in the RCNC ‘ligas’, this comprised some 12 to 14 races a year competing against some very accomplished teams. So, this led to me taking on the role of TOMs Organiser for liga race crew, regular TOMs sailing, and special events.

In early 2014 I made the decision to step down from the committee, as I needed to direct some time elsewhere, and we had some new and very capable members who could take on some of my responsibilities. The TOM roles were easy to fill but nobody wanted to organise the monthly Calpe presentations. Suddenly, it was decided to combine the school room presentations and the practical sail training days under one umbrella. And whose umbrella was that ….. mine! Having stepped down off the committee I found myself with no less responsibility. And, needless to say, at that same time I was made an Honorary CBYA member and invited to all committee meetings. Hey, the best laid plans of mice and men …………………………..

Another hat I am currently wearing is that of Membership Secretary. This came about in 2016 when Johny Tweedale, the Treasurer, resigned. At that time there was a fluid existence between the accounts and the membership list. With a new accounting package the membership list needed to mirror it. Both systems needed to be a check on the other, and I’m pleased to say it’s working well.

And so… my involvement goes on… how many hats can I wear?

What achievements are you most proud of?

There are lots! 1) planning and running the CBYA Regattas, 2) being here to help with the growth of the CBYA, 3) being asked to skipper the TOMs for ‘Liga’ and Match Racing, 4) as skipper for the Royal Club Náutico Calpe entry in the Spanish ‘Miss Cup’ Racing, and 5) being the first recipient of the Maurice Pilkington Award in 2013 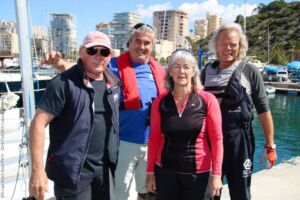 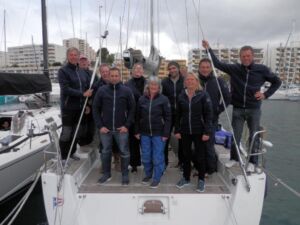 1) The CBYA Regatta was first introduced in 2012, and I’m proud to have found a formula which brings all our members together for the day, whatever activity they excel in. We needed to find a way to involve every CBYA member if they wanted to be included; and the format has stayed similar ever since. It is held in Calpe, with sailing on the TOMs, using CBYA members boats & crew as adjudicators, so that every member can sign up. There are seamanship tasks, racing events, cruiser crew to score the tasks, a few leisurely hours on a cruiser and, of course, followed by lunch and award giving. So – something for everyone with one aim in mind …. to have a fun day on the water for every CBYA member. 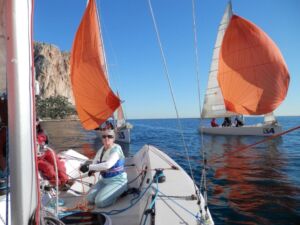 2) The growth of the CBYA has been instrumental in keeping it together, and I’m proud to be part of it. All are welcome, but many are transient. We need active boating members. We are doing well but we need more help with the different disciplines the club now has to offer. Get involved. Get grouped together with other members for a “job” which you can share throughout the year – job share – and while you are away, others are here. Keep the CBYA afloat!!

3) As a TOMs Liga Skipper, I and the team won our first race beating three good Spanish teams. I was also asked to skipper a team for TOMs match racing, which was nothing either I, nor any of the team, had done before, but we threw ourselves into it with gusto. The Spanish were usually ahead – but we gave them a good run for their money. 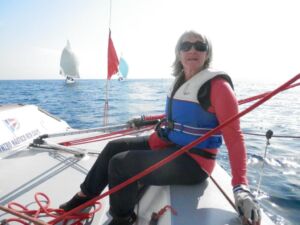 4) In 2015, I was asked to skipper the RCNC team in the “Miss Cup” Trophy. Teams from across Spain were invited to join the competition which was tough and exciting. We did not win, neither did we come last, but we learnt a lot; such a pity the trophy was not repeated.

5) I was extremely proud to be the first recipient of the Maurice Pilkington Award in 2013. The CBYA present this award to recognise the people who have had a significant impact on the club. 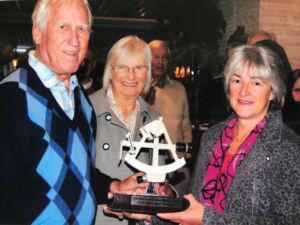 Give us one of your amusing anecdotes Rachel…

Picture this. UK, Round the Island Race. All female crew, great sailing conditions of medium to good, picking up as we enter the Solent. Sail training boat, so no roller reefing, foresail changes and slab reefing the main. Crossed the line at Cowes and the engine would not start. Hailed a committee rib to confirm we’d finished whilst sailing around in circles in the melee of boats. Blowing a westerly 6 by now. You tell your crew they’ve got to sail from Cowes to Lymington! – against the wind!! By the time we’d reached the “Jack in the Box” there were no boats in sight. Now, all we had to dodge were the Lymington – Yarmouth ferries. 1) be prepared to reef sails without roller reefing, 2) be prepared with your speed, 3) be prepared with mooring lines.

If I can liken it to anything, it was like sailing a 34 ft yacht into the TOMs mooring. I HAD TRUST IN MY CREW!!

What are your hopes for the future of CBYA? Any final words to our members?

Yes – long may the CBYA continue!! If you enjoy any of the disciplines, please offer your help. You might not be a committee person or on the Costa all the year, but a little help from all our members would go a long way to easing the work load of the committee. Don’t be a “I’m retired, I organised so much when I was working, I’m not doing it now” person.  If you want the benefits of the CBYA, at CBYA prices, then please help whilst you are here. Keep the CBYA going strong!! 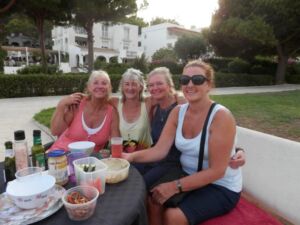 Rachel – thank you so much for sharing your thoughts and giving us this retrospective. I am sure the CBYA members will enjoy reading your interview. 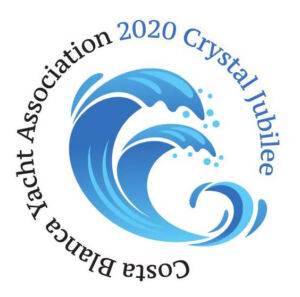 Brilliant Rachel, .Thank you. Wonderful memories. How many CBYA hats you have so capably worn! ! Your many medals are in the post. Thank you for sharing your skills and knowledge all these years.
Not sure how I can follow that! Working on a few notes but mine will be pretty tame compared to yours..
Brenda xx

Many thanks Rachel for all of your work in supporting the CBYA since you joined all of those years ago!

Rachel es una chica fantástica! Such outstanding work and generous dedication… I hope one day I can finally get to sail with her when all this covid storm abates. Stay safe!

“… how many hats can I wear?” Rachel wonders. Apparantly a lot! My, I’m really impressed. Loved reading this story, Thanks for sharing it! Look forward to the next interview.

Hi Rachel, really liked reading your story. Poor you, having had to wear that many hats. And also a bit “shame on m
embers” who want to enjoy themselves but not share (even a bit) of the workload. You are an example for all of us, Rachel. Chapeau!!!!

Well done Rachel. You are an inspiration to us all.
Great to be reminded of the ‘old days’ when there was hardly any sailing (no boats/yachts) and a rather haphazard social scene.
Well done to Rachel + all in the CBYA and the Committee for all the hard work to keep the CBYA active & enjoyable.

Rachel
You are an inspiration . Thank you for all of your hard work and your friendship.
Vicky