This was another really super day’s sailing, with good company, good weather and GREAT challenging winds.

In fact, the whole day proved quite ‘Challenging’!!

We all met as normal 10am at Bar Due. Due to a great response, we had nine crew members for this trip. Possibly at least two too many in truth, so a lesson learnt there. (Please note numbers may need to be restricted in the future.)

Because of the increased crew numbers, Graham had negotiated a larger boat: a Jeanneau Sun Odyssey 46. A newer and very nice boat indeed, but unfortunately the cockpit proved to be no bigger than the 39’ we normally have. Challenge No. 1.   It was rather cosy. 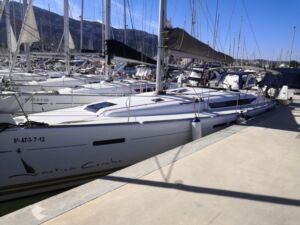 After a short briefing and familiarising of our boat, we left our berth at around 10.45, in fine weather and a nice steadily building northerly breeze. On exiting the mouth of Dénia Marina, the wind appeared to be more westerly around 12kts, so we headed into the wind to set our sails, then bearing away on to a reach, we were heading for St Antonio point, always our preferred point of sail. There had been quite strong winds over the weekend, so the sea state was around half to a meter swell.  The wind built up fairly quickly and at around 18kts we started to reef the sails. Alan and Shirley, our most experienced, ‘Racing Sailors’, did a great job. The wind continued to build, 25 -28kts and gusting as we passed Jávea, Barraca and Grenadella bays, more reefing!! 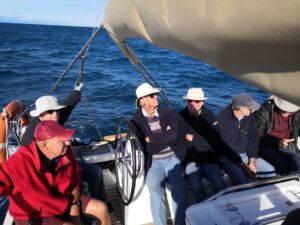 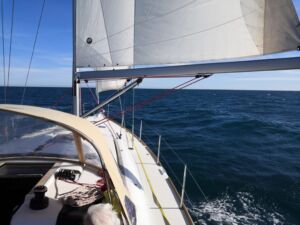 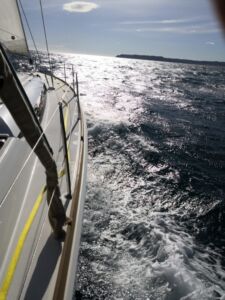 So, we were making great headway, SOG (Speed Over The Ground) around 10-11kts at times. A little difficult to tell accurately, as the instruments were not working… Challenge No. 2.

1st Mate Alan, had several attempts to master the instruments, and had them working intermittently, but we gave up in the end.

Graham has the policy of trying to involve everyone, who wishes to be involved, sharing the time on the helm, so mostly everyone had a go, some better than others, perhaps a little rusty!!  It was suggested making Portichol Island the target, at around 12.30pm, to then heave to behind the rock, in a wind shadow, but we were making such good speed and all enjoying the ride, we simply carried on, until eventually having a very clear view of Calpe!

We lunched while on the move. Graham was aware we needed to be back in Dénia for around 5pm, and conscious that the westerly wind may not hold, we turned around at 1.30pm. 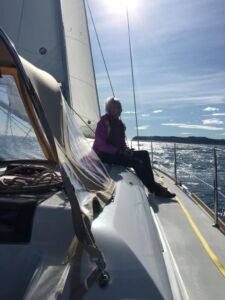 The wind did hold at approx. 25kts, BUT now from the north. So we were beating into it and tacking several times. The sea state had risen too, about one and a half to two meters. Sailing was still good, exhilarating, but making headway slower, however we were still in good time.

But then passing St Antonio, at around 3pm, with the northerly right on the nose and tacking more frequently, progress was slowing down. Again, given time constraints, Graham made the decision to start the engine and drop the sails at 3.30pm.

Challenge No. 3. The engine wouldn’t start! An electrical fault, making it appear like flat batteries, so after several attempts, whilst continuing to sail, at around 4pm and still a good 3 kms out, we contacted Kiko at Náutica Corcho.  He gave some instructions to try and solve the issue, which didn’t work, so eventually he said he would come out in another boat to help. This took some time and it wasn’t until 5pm, when he finally came along side and his mechanic jumped aboard. He worked below in the engine compartment for 20 minutes, so not a simple fix, before the engine finally, and very thankfully came to life. A relief and a big cheer from us all. Thankfully also, to the fact that the issue was not of our doing. Safety was never an issue, although fading light could have been. We finally arrived on the berth just before 6pm. A beer at Bar Due has never tasted better.

A great, challenging day, but hugely enjoyed by everyone: many thanks to all.

NOTE: THE NEXT SCHEDULED CHARTER DAY IS 2020, MONDAY 27th JANUARY.

Thanks for your post Graham. An exhilarating day’s sailing I’m sure! Slightly concerning that with a relatively new boat, it was presented for hire with non functioning instruments and an unreliable engine. I would have expected more from Corcho! Clearly they should take away some lessons learned too. Glad you all got back in one piece and had fun. Cheers!
Neil