After two failed attempts to run the event earlier in the year, either due to bad weather, or to lack of safety boats, we finally managed to get the 2018 event arranged for Thursday 25th October. Twenty CBYA members signed up for the event, including at least six RCNC-certified TOMs skippers, and two safety boats.  Safety cover was provided by Bob Hodge in his motor boat, and David Hill, of the Sea School Costa Blanca in Altea, in his yellow rib.

After some discussion regarding the best crew configuration it was decided to only sail four TOMs with five crew per boat, with the skippers being Ian McKay, Paul Smithard, David Crabb & Jenny Rawle. We rigged the TOMs, and then headed out of the marina against a fair on-shore wind. After checking the wind conditions outside the harbour, we decided to head north to El Portet, Moraira. 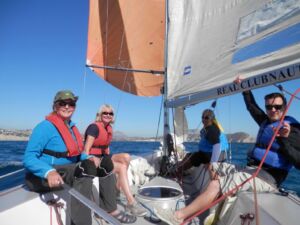 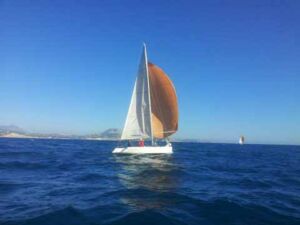 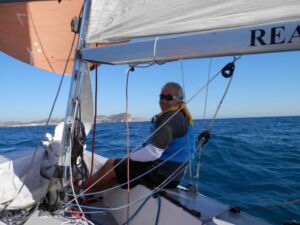 After rounding the Penyon de Ifach, we all enjoyed an exhilarating spinnaker run across the Moraira bay in Force 3 conditions. Unfortunately brought to an abrupt end on Ian’s TOM, when the D-ring spinnaker pole mast attachment sheared during a gybe! 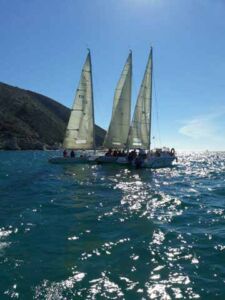 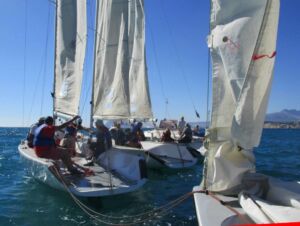 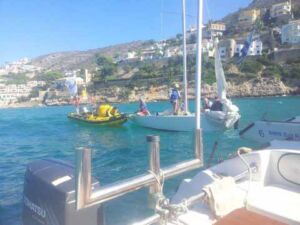 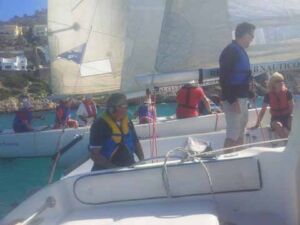 We found very choppy sea conditions in El Portet bay – not very comfortable for a raft up, so we didn’t stay long after enjoying our lunch.

The wind had increased significantly for the beat back to Calpe, so lots of water on board as we battled our way back through the swell. David’s TOM also experienced rig failure – this time their main sheet block shackle to the traveller failed, forcing them to jury rig an attachment.

One skipper even entertained his crew by going for an unscheduled swim!

Many thanks to David & Bob for providing the safety cover, and to Rachel for organising the event.

Another great day out of the TOMs!