DEAL: Why Not Get Legal with the Sea School Costa Blanca? 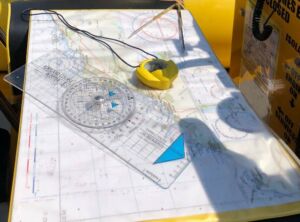 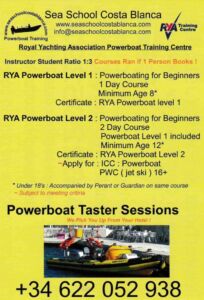 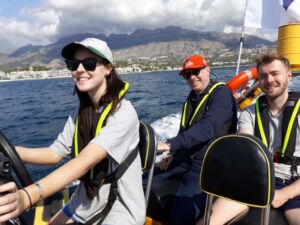 RYA Powerboat level 1 and 2 courses, run throughout the year, even if only one person books!

After two failed attempts to run the event earlier in the year, either due to bad weather, or to lack of safety boats, we finally managed to get the 2018 event arranged for Thursday 25th October. Twenty CBYA members signed up for the event, including at least six RCNC-certified TOMs skippers, and two safety boats.  Safety cover was provided by Bob Hodge in his motor boat, and David Hill, of the Sea School Costa Blanca in Altea, in his yellow rib. END_OF_DOCUMENT_TOKEN_TO_BE_REPLACED

The 2018 CBYA-RCNC Challenge took place at Real Club Náutico de Calpe (RCNC) on Sunday 14th October. This is the only team racing event in the CBYA calendar and involves two teams, “Lubina” and “Bacalao“, competing for the honour of being awarded the CBYA Challenge Trophy on TOM 28 yachts. The teams are made up of crews of four sailors – two from the CBYA, and two from RCNC, on each boat.

END_OF_DOCUMENT_TOKEN_TO_BE_REPLACED

The ARC and Cruising the Caribbean Presentation

After the enthusiastic response to his last “Greek Oddity“ presentation, Richard Jones agreed to perform once more for the CBYA!  His second talk covered his experience in crewing on Terry Sandling’s Oyster 56, S/Y Chantana, in the 2017 ARC (click on 2017 ARC for more details), and their subsequent cruise around the Caribbean Islands.

END_OF_DOCUMENT_TOKEN_TO_BE_REPLACED

Cruising in Greece with the CBYA

The CBYA now offers annual cruising holidays to our members.

The first CBYA charter to Croatia, which took place in September 2018, was a great success. A second Croatia charter cruise took place in 2019 – this time to the nautical paradise of the Kornati Islands, and the Sibenik regions. Most of the Kornati Islands are within a national park, which is  known for its natural beauty, numerous coves and crystal blue waters. This year we plan to cruise around the Cyclades Islands in Greece from 19 – 26 September 2020. END_OF_DOCUMENT_TOKEN_TO_BE_REPLACED