“The forecast is for some rain, but they’ll be warm showers”, Hugh said…. Foolishly I believed him and neither of us took waterproofs, nor did most people participating. 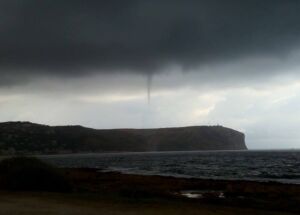 y had we left the pontoon when the ominous clouds started to drop their load, first a few drops, then an unpleasant drizzle which meant I couldn’t see and m 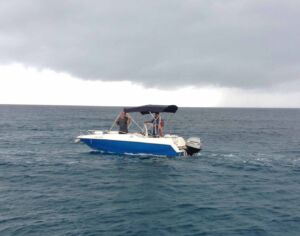 y glasses hung round my neck, protected by my Performance buoyancy jacket. The dark clouds rolled across almost continuously, depositing many millions of litres of water on us, with barely a glimmer of brightness, and certainly no sun!

At the same time, this tornado was happening in Jávea [on a positive note, our garden benefitted from the much-needed deluge!].

The timed tasks were performed in an orderly fashion: one whistle to start and two whistles for ‘completed’ – although one yacht was seen to immediately retrieve the ‘man overboard’ [which floated conveniently close to their TOM] instead of following the correct RYA procedure – not sure if Ron penalised them. When it was our turn, the rain eased and the wind dropped – Sod’s Law! 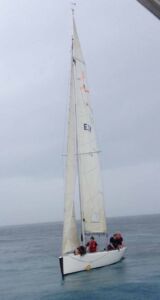 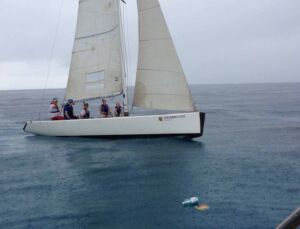 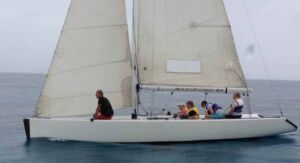 Pablo duly appeared with the Committee boat and set the course for the three races. I was debating whether to ‘jump ship’ to Feels Great, but having seen how much they were bobbing around in the swell, decided I was better off where I was… which was mostly half lying to get protection from the wind, clinging on to the shroud when we were really heeled over, with part of the soggy spinnaker wrapped round my legs! I did help hold out the boom and disentangle a sheet caught on the mast, but have to admit I was mostly ballast! And briefly a hindrance as the cuff of my long sleeve – to protect me from the sun LOL !*! – caught in the jib sheet block.

The races were double sausages, with spinnakers allowed in the first, but only on the last leg back to the finish: only two boats attempted to fly them in the flukey winds. Have I mentioned it was raining? Actually pouring by this stage, but the hardened sailors were up for a second race, this time NO spinnakers as wind/conditions too strong/bad: the waves at times came at us at quite a height. At the end of that one we all indicated we wanted to hang ourselves, and the third race was fortunately abandoned, Pablo and Jordi also resembling drowned rats.

I stood under a hot shower fully clothed to warm up, and dried my hair which also helped – until I’d to make the dash back to the Club, as it was STILL raining,

Lunch was delicious, big improvement on last year’s fare, and of course the rain then ceased.

I did actually [quite] enjoy the outing, but have to admit I’m more a fair-weather sailor!

Thanks to everyone for attending, especially the RCNC members, as it was such horrible day! Next year we promise sunshine!

Total number of people, including lunch only = 33 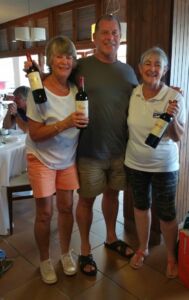 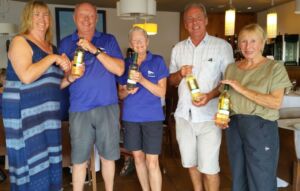 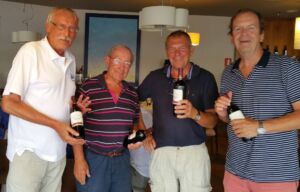 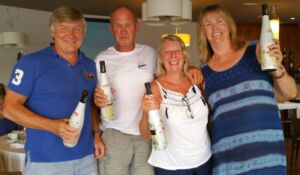 Last but not least, huge thanks to the organisers: Jenny, Rachel and Karlheinz without whom the event would not have happened. 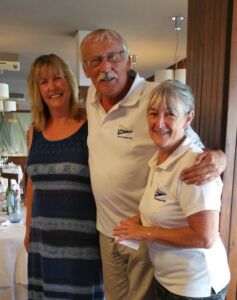 Well done all the organisers. That’s sailing for you…never guarantee the conditions !
I think you all need prizes for keeping going. Thanks to RCNC, the boat owners, Gillian for the report and everyone else in the organisation..
Can’t say I regret missing it……..I was on the water and it was even hot, 36C…blue sky no clouds….but that’s Norway for you….nothing guaranteed !