Well I did, and was lucky enough to be invited along by Bob to join him, with Hugh and Piers, to check out the two boats (“Louise” & “Wally”) that are kept down at the beautiful and quaint little bay of El Portet,  Moraira otherwise known as “Paradise Bay”.

It was Wednesday afternoon 3rd May. The weather was great,  in fact it was perfect for sailing, – pure blue sky, very warm, and accompanied by a fair on shore breeze. What more could you ask for? It was time to check the boats out and go sailing!
We pulled the two boats out from a jumble of others and checked them over, they looked fine. Maybe a little bit of maintenance required to polish them up a bit, apart from that they were ready to be sailed. So it was time to get them rigged and test them out on the water 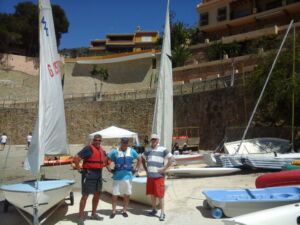 Within no time at all both boats were being pushed backwards from the beach into the crystal clear and shallow waters of Paradise Bay, – carefully negotiating some sand castles on the way. Piers and I were the first to set off and as soon as the wind began to fill her sails, the centre board was pushed down and we were heading out to sea away from the beach. It wasn’t long before Bob and Hugh were catching us up.

How amazing to be sailing in such beautiful surroundings, and we had the entire bay to ourselves. We sailed back and forth from one side of the bay to the other, each taking the tiller and whizzing past the other boat which Bob and Hugh were sailing  – it doesn’t get much better than this! 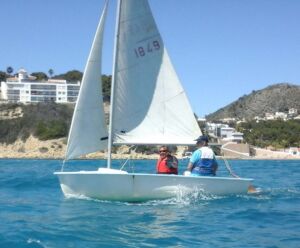 After a while we came ashore and swapped boats. Although they may appear very similar in appearance, design and handling, one is slightly bigger than the other and also goes a bit faster. Other than that, equal amounts of fun can be had with both. Once we had sailed in both boats it was time to come ashore where they were de-rigged and slipped back onshore. 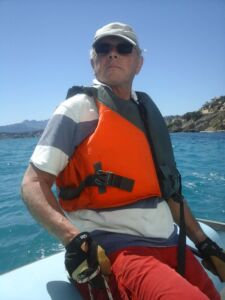 Once we were happy that the dinghies were safe and secure, and everything had been put away in the locker, we headed off to the bar which overlooks the bay, where we joined my wife Kim and enjoyed some ice cold beers whilst we swapped notes. What a perfect way to spend an afternoon and an even better way to spend an a few hours afloat.

Thanks to Bob, Hugh and Piers.

For more information on the CBYA dinghy project – click HERE

Garry
Thanks for your blog, yes it was a great afternoon and pleased you enjoyed it.

I was out again today with another CBYA member Peter Knowles who was also suitably impressed and has pledged to help us with maintenance when he gets back to Spain in September.

So there we go…the Dinghy Project almost launched, just a few final official matters to be finalised and I hope our members will be sailing throughout the summer.

Been trying for over a month to find out how I can go dinghy , can anyone advise me?

Best you contact info@cbya.org for attention of the Chairman, Bob Gordon.